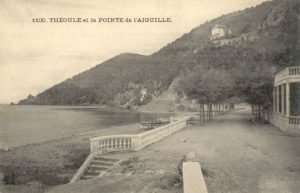 Theoule arises from the mists of time, from the molten lava, which has left these red rocks so characteristic.
Theoule was part of the domain of the Lord of La Napoule and it was so until the revolution. Its four ports with their yachts and their few fishing boats are
to replace the many merchant ships and war that in the seventeenth century anchored in this important natural port.

On order of Richelieu, a defense tower was built at the beginning of the XVIIth century for the defense of the Bay and the Islands. It was largely destroyed a few years later for budgetary reasons. 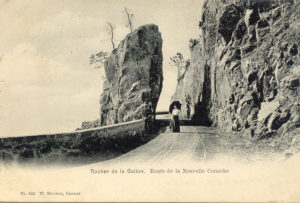 The Château de Théoule has been transformed over the centuries. It was built on an old Savonnerie built in the 17th century which remains some vestiges in the basement, and took its current architecture during the various enlargements built since the beginning of this century.

The Legend of the Smuggler: Mr. Gardanne has left his name to a natural cave. On April 10, 1863, the first train made its entrance at the station of Cannes and as of 1882, while its population did not exceed 50 inhabitants, the district of Théoule saw itself endowed with a station thanks to the beauty of its enchanting site which had seduced the board of directors of the company PLM.

Théoule, its balcony on the Azure, its red rocks, red Porphyry but also the blood of the 11 sailors of the naval group of assault who died there when they landed in the night of 14 to August 15, 1944 and whose The companions of this long night come to perpetuate the memory every August 15th.
Near the monument to the dead on which are engraved the names of the 11 sailors and overlooking the only place in the Alpes Maritimes where took part of the landing of Provence, the town erected a huge Cross of Lorraine in memory of the Appeal of 18 June. 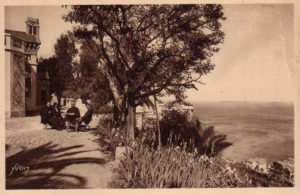 In 1888, thanks to the donation of the Pierron family, Fr. François Virgili created Villa St Camille, a welcoming home where Monsieur Abel Ballif, founder and first president of the Touring Club de France, came to rest. region, came to settle and finish his days in Théoule where he was buried in the small communal cemetery.

Imported from Australia to Bocca by a sailor in 1864, the mimosa quickly reaches Théoule where, at the beginning of the century, we find one of the largest farms of the south (more than 4000 trees): mimosa ambassador of the Côte d’Azur and from Théoule, where every year there are 400 to 500 mountain bikers participating in the “Mimosa route”. 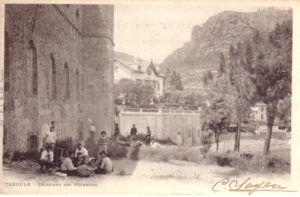 Theoule was able to tribute to a great man, General Bertrand, hero of the resistance, having been several times Mayor of the commune, and his wife “Mary” (his name of
resistance code). Man and woman of the shadow, which allowed to discover the secret of this extraordinary Enigma mechanism used by the Wermarcht to decipher the most secret messages.

The architecture of the beautiful villas at the beginning of the 19th century, with La Galère harbor in the middle of the 20th century or the more recent Anti Lovag bubble houses, was once again able to mark and give its stamp to Théoule sur Mer. The story of Theoule sur Mer would not be complete without a thought for the big names who live in Theoule, we will only mention one example, which is one of the patrons: Pierre Cardin.