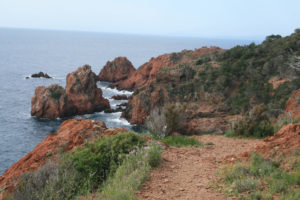 From Port Santa Lucia to Agay stretches the coastal path, traced on the old course of customs.
Walking along this path, you will discover the beauty of our coast, between steep coves and sandy beaches.

Itinerary: Take the path (yellow markings).
The trail winds between the sea and the Esterel mountains. After about 7 km, after Pierre Blave Beach,
reach the edge of the road to reach the D-Day Beach, from where the trail continues. You finish the
walk to Camp Long Beach. Going up the road, you can take a bus back.

You can go back to your starting point by public transport, or shorten the route at any time and come back
on the main road to take the bus or the train. Be careful, these transports are not frequent,
inquire in advance about the schedules. 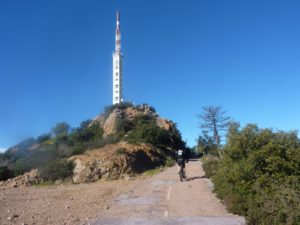 Access by car from Agay: at the roundabout, take the direction “Massif de l’Estérel”, go under the small bridge
of the railway, to pass the artisanal zone and, immediately after, to take on the right the indicated small road
“Massif de l’Estérel” .Follow then the signs “Pic de l’Ours” (about 8 km).
Several trails start from the Notre Dame pass: take the marked trail with a wooden signpost
“Bear’s tooth – Bear’s peak”

The trail starts slightly uphill. Taking a right at the intersection, you arrive at the foot of the Dent de l’Ours.
At the rock, enjoy the breathtaking view of the bay of Cannes with its famous Lérins islands, the bay of Frejus
and in the distance the massif of the Moors. Continue along the path that climbs to the summit of the Pic de l’Ours.
Its altitude of 492m opens a wide panorama on the Esterel.

Pass the transmitting antenna to continue the trail that goes down 50m further on the left (be careful steep path).
You can also choose to go back down the asphalt road (20 minutes of walking extra but gently).

From June 20 to September 20, the Massif de l’Esterel can be closed from day to day depending on the risk of fire.

The tour of Cap Roux 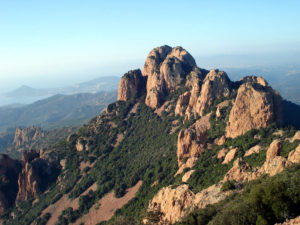 Itinerary: Climb the stairs leading to the chapel in the rock.Continue the path to the fountain (drinking water).
Take the path on the right for 50m then take the path that goes up on the left.
Continue for about 1.5km and at the next intersection, turn completely left to go up to the blocks
red rocks of the Saint Pilon pass. You admire then an exceptional panorama on the cut out coast. The path runs along
this ledge then leads to a new intersection.
On the left, the dead-end path takes you for 100m to the summit of Cap Roux and to its orientation table (altitude of 453m
with views of Cannes to Cape Camarat).
Go down the same path and turn left to continue the walk.
You leave the sea side of Cap Roux to go down gently towards the Massif (do not take the paths starting on the right).
You arrive at La Fontaine. 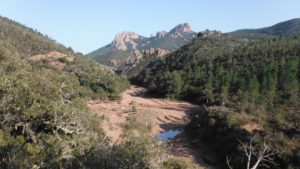 Notes: Course without difficulty
The trail runs alongside the Grenouillet River (on your right).
After a good half hour, you will cross the river by the ford and continue the track.
The landscape then becomes more boxed and turns into a small canyon of red rocks better known as
“Canyon of the evil infernet”.
This nickname comes from the old French and reminds the period of the Middle Ages when we threw the plague victims at the bottom of this ravine.
At the next junction, go through the left lane crossing the ford.

The last 200 meters are the only elevation of the course but once arrived at the top of the coast, the panorama opens
to the lake of Ecureuil.

From June 20 to September 20, the Massif de l’Esterel can be closed from day to day depending on the risk of fire.

The Cave of Saint Baume 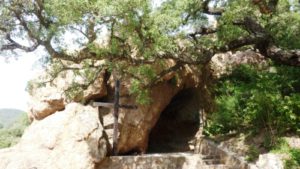 Climb the stairs leading to the chapel into the rock. Continue the path to the fountain (drinking spring water).
Take the path on the left for 100 meters. You arrive at an intersection. Take the path on the right
which goes directly to the cave where the hermit St Honorat lived in the 4th century before founding the Lérins abbey on St Honorat island
off Cannes. Beautiful Panorama.
Back in the opposite direction.